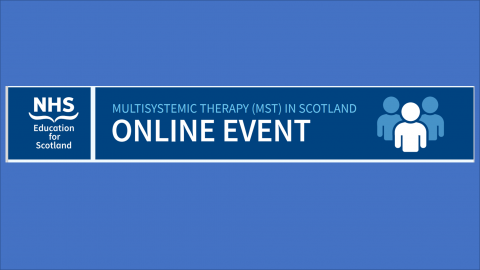 On the 2nd December 2020 an online information event was held to, celebrating 10 years of implementing MST in Scotland and to share information about MST with other Local Authorities and service providers. The event was organised by Mhairi Fleming, Multisystemic Therapy Expert and Head of Programme for Scotland who works for NES (NHS Education for Scotland), in partnership with Pei-I Yang, Programme Manager for Edinburgh MST and Vicky Cassells, Programme Manager for Fife MST . Mhairi’s role is to provide consultation to MST teams and support to Local Authorities, NHS Boards and service providers that may have an interest implementing MST in their community, to improve outcomes for young people who are looked after at home and reduce the numbers of young people who become care experienced.

The morning was opened by Cathy James MST Lead for the UK and Ireland, who welcomed everyone to the event. Mhairi, via video, provided an overview of MST, took the audience through the journey of MST in Scotland over the last 11 years, and explained how MST could add to the range of services available to young people and their families, who without support are at risk of becoming care experienced. She also highlighted some of the fiscal benefits to organisations in implementing MST and thanked the teams in Edinburgh and Fife for their continued hard work and dedication.

The first presentation was titled ‘Two Local Authorities experience of implementing MST’. Bernadette Oxley, Head of Children’s Services, from the City of Edinburgh Council started by sharing her experiences. She explained that the journey into MST began following a 2013 Care Inspectorate review where the support children, young people and families could access at an early stage was highlighted as an area of development. After a £8.5M investment they saw the number of looked after children decrease. Bernadette explained how MST fitted into the Council’s overall strategy that addressed the need in the Looked After population and in turn had increased the emphasis on family based care. The use of strength based approaches has led to an increased wellbeing for children and young people and was helping to increase the resilience of families. The Council’s journey has not ended and they have several ambitions for the future, which include keeping young people at home where it is safe to do so and to expand the reach of MST.

Mark Smith, Service Manager (Children and Families and Criminal Justice Services) in Fife Council talked about his experiences of delivering MST. The first team in Fife was established in 2009 with the second team joining them in 2011. Mark explained how MST is one of a small number of intensive community support resources available in Fife and it is accessed through referrals to the Intensive Community Support Panel. The successes of the team were highlighted alongside some of the challenges that had been faced and overcome. Within Scotland there is a number of national policies that govern practice and local policies. These include the ‘Getting it Right for Every Child Policy’ (GIRFEC) and The Promise (2020). Fife Council has found that MST supports and assists in the successful alignment of Council Services against the work of these national policies.

The final presentation before the break was ‘An overview of some of the work that NES are undertaking across Health and Social Care (and beyond)’ by Judy Thomson, Director of Training: Psychology at NHS Education for Scotland (NES). Judy gave an overview of the work of NES Psychology within Health and Social Care, which includes training applied psychologists, training and education for the multi-disciplinary and multi-sector workforce and provision of guidance on delivery of psychological care, interventions and therapies. The department works alongside the Children & Young People’s Mental Health and Wellbeing Programme Board to support and provide training and guidance to the Children and Young People’s workforce. NES supports staff working with children and young people on the edge of care/custody by jointly supporting the MST Consultant Post within Scotland with MST-UK & I. Judy announced that this collaboration has been agreed for the next 5 years which will allow the further development of MST across Scotland and is something that both NES and MST-UK & I are excited about.

After a short break, MST Child Abuse and Neglect (MST-CAN) Consultant Anne Edmondson provided an overview of MST-CAN. It is a treatment model for children who have experienced physical abuse and/or neglect and their families and focuses on serious, complex and underlying issues in families including, adult substance abuse and adult and child trauma. The referral inclusionary and exclusionary criteria were explained alongside a description of how an MST-CAN team is implemented and the specialist training that staff receive. The adaptation has a number of interventions that teams can use with families. The presentation focused on the research and outcome studies that have taken place and the successful MST-CAN UK outcomes for children and families referred to teams between January -December 2019.

Vicki Cassells, MST Programme Manager, Fife Council and Pei-I Yang, Programme Manager, Edinburgh City Council presented a team and family perspective on ‘Delivering MST in Scotland’. Within their presentation there was audio feedback of a Fife family’s and multi-agency experience of MST. This provided the audience with parent’s and young people’s testaments on their own MST journey and was well received. Vicki and Pei-I described their experiences of how MST integrates into local authority framework and the wider system of support available to families.

MST therapists Kerry McClelland and Clare Williams talked with passion on their experiences of working within MST. They talked about why the job is worthwhile and what it takes to achieve the MST motto of ‘Whatever it Takes’. They finished by describing their favourite sessions with families and how the MST model works to empower parents to move forward and problem solve. Despite being an online event, their positivity and enthusiasm could be felt and one of the audience commented “Kerry and Claire you are both showing such great enthusiasm and engagement - no wonder you achieve positive outcomes with your families!”.

A parent and MST therapist from Edinburgh described their experience of MST. They talked about the referral behaviours that were present when MST became involved with the family. These included absconding, substance abuse and Antisocial behaviour (ASB) in the community. The family are at week 17 of treatment and reflected on the interventions that had been put in place to address the referral behaviours. Which included focusing on a curfew plan, supervision and monitoring and the young person’s school attendance. The parent talked openly about life before MST and their concerns of having services involved however, at week 17 they are now feeling calm and in control and that there is more laughter within the family home. It was great to hear the parent speak so positively about their journey and to hear that they felt confident enough to offer other parents advice if asked. They finished by talking about the progress that has been achieved with the referral behaviours of the young person - there has been no anti-social behaviour in the community or at home and increased school attendance for 4 weeks.

“Thank you for the opportunity to attend. It was great to hear from such positive members of staff and to hear direct from families who have benefited from MST”.

“Thanks that was really interesting”.

“Really great morning and many thanks to all those who presented”.

A huge thank you to everyone involved in making this such an informative and successful event. You really brought MST to life and showcased why MST is such a powerful Evidence Based Practice.