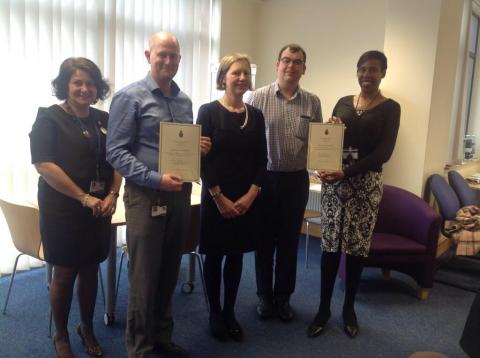 On Thursday 26th February 2015, to the surprise of the MST Northamptonshire teams themselves, during their quarterly MST Board Meeting, the MST Supervisors and Business Support Officers for both MST Teams in Northamptonshire, England, were presented with High Sherriff’s Awards by Mrs Anne Burnett, High Sherriff* of Northamptonshire. The awards, given to each team, for all team members, were in recognition of the “Significant contribution you as an MST Team have made, and the valuable service you have given to the community”.  The awards which were an unexpected additional item on the agenda, were given deliberately as a surprise by Anne, who wanted to recognise MST Northamptonshire’s efforts, in her final attendance at the local MST Board.

Tessa Saunders, MST Supervisor for Northamptonshire North team, said Anne attended two MST supervision and consultation sessions and showed a keen interest in the progress the families made in reducing the referral behaviours in the weeks between the two observation sessions. It was lovely for the hard work of the team to be recognised by someone who holds such a prominent position and has been a real champion for MST, she will be missed.

Phil Reynolds, MST Supervisor for Northamptonshire South team said the awards came as a great surprise, and that the team is pleased to see their work recognised.  Thanks to Anne for all her support over the past year.

*For those outside of the UK, the High Sherriff is an independent non-political Royal appointment for a single year, given to an individual to represent one of the 55 counties in England and Wales. Whilst the duties of the role have evolved over time, supporting the Crown and the Judiciary remain central elements of the role today. In addition, High Sheriffs actively lend support and encouragement to crime prevention agencies, the emergency services and to the voluntary sector. In recent years High Sheriffs in many parts of England and Wales have been particularly active in encouraging crime reduction initiatives, especially amongst young people. Many High Sheriffs also assist Community Foundations and local charities working with vulnerable and other people both in endorsing and helping to raise the profile of their valuable work