A Mother Expresses Her Gratitude for Multisystemic Therapy 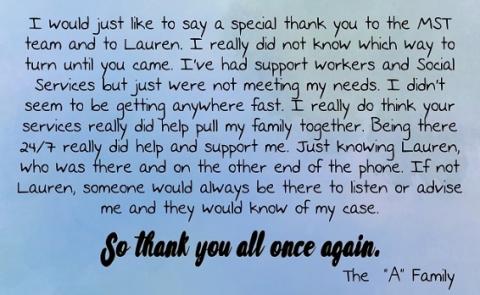 Ms. Anderson wrote a letter to express her appreciation. Here is an excerpt from that letter:

The Anderson family was lost in conflict. Despite Ms. Anderson trying various programs and services and having the support of the Department of Children’s Social Care, her family was embroiled in constant conflict. Two of her children were referred for Multisystemic Therapy (MST). Her son was physically aggressive at home with his siblings and mother. He was abusing drugs and disruptive at school. Her daughter was also aggressive toward family members and was not attending school. Ms. Anderson was suffering from depression and unable to make a change in the family dynamics. Lauren, from the MST-FIT team, was assigned to the family, and things began to change.

Lauren worked with the family to empower Ms. Anderson in her parenting role, rebuild relationships, increase warmth and most importantly, reinforce effective coping and emotion-regulation strategies. Mom changed her parenting style by implementing boundaries and conflict-management skills through following safety plans and using Dialectical Behavior Therapy (DBT) techniques. Mom made use of social supports, improved the home-school link to increase communication, and upped her supervision and monitoring of her children, their peers and drug use. This provided stability within the family and a sense of security. Not surprisingly, the relationships between mom and the youngest children significantly improved and became a lot warmer.

At the end of MST treatment, it had been six weeks since any incident of physical aggression occurred, and arguments in the home now resembled typical family squabbles. Ms. Anderson’s son was showing improved behavior at school and was no longer associating with negative peers and or taking drugs.