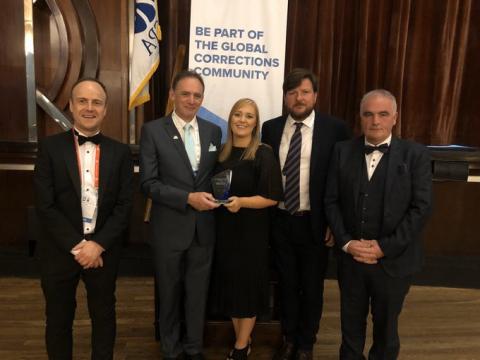 The Bail Supervision Scheme, which was designed by the Department of Children and Youth Affairs (DCYA) and is operated by Extern, was presented with the Community Corrections Awards 2019 at the International Corrections and Prisons Association (ICPA) Conference.

The ICPA award is a “Special recognition by the Association, its members and indeed the wider correctional community for efforts and initiatives within the correctional sphere.”

The BSS provides intensive support for young people’s caregivers to facilitate sustainable change in young people’s behaviour including adherence with bail conditions, reduced re-offending and engagement in pro-social activities. One of its primary aims is to reduce the number of young people who are detained in custody while awaiting a court decision.

Minister Zappone, as part of her Budget 2020 package, provided additional funding for the extension of the Bail Supervision Scheme. The Minister noted that the additional funding being made available in Budget 2020 will allow her Department to begin the process of rolling out the scheme to the courts in other parts of the country.

“Support for an innovative bail scheme that reduces the risk of re-offending benefits the whole of society. It improves education and training participation. It supports often marginalised groups of parents and caregivers within their homes enabling them to support high-risk young people in their care to meet bail conditions and reduce reoffending.”
Click here to access the Evaluation of the Bail Supervision Scheme for Children