Bienvenue to the Montpellier Team 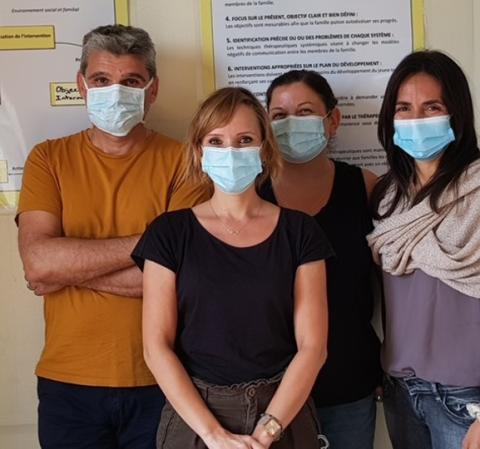 MST UK & Ireland welcomed the first team in France in September 2021. The service is being hosted in Montpellier by the Centre Hospitalier Universitaire (CHU) (the University Hospital of Montpellier). Professor Diane Purper-Ouakil, Head of the Medical Team (Psychological Medicine for Children and Adolescents) Professor Purper-Ouakil had identified a number of unmet needs within the services already provided by the CHU for young people. These included:

Professor Purper-Ouakil discovered MST when she was researching a service that would meet these un-met needs of the young people they were seeing at the hospital.

Professor Purper Ouakil and colleagues travelled to London to meet with the MST UK & I Lead Cathy James. They witnessed the work of a MST team in disadvantaged neighbourhood in South London. The CHU team realised that the situations discussed in supervision were similar to those that concerned them in Montpellier. These were social isolation of families, the antisocial trajectories of families and/or young people, mental disorders, substance use, difficulties of diverse cultures and risky behavior among young people.

Professor Purper Ouakil and her colleagues returned to Montpellier to begin the work of setting up a MST Team. There were a number of implementation challenges to overcome. These included:

The project was supported by a number of different stakeholders which included professionals from the health agency, CHU, child welfare, national education, justice and medico-social institutions. They tapped into existing networks for young people at risk and adolescents with complex needs. The project was financed by the regional health agency which has led to a sustainable budget for the team.

Despite taking a number of years in the preparation, the plans became a reality in 2021 with first the supervisor Anna Maria Garcia being appointed and then the therapists Marion Camal, Vincent Mazoyer and Manon Monnier. The team is supported by Catherine Guadagno, Chief Nurse, Laurie Surig, Consultant and Back Up Supervisor and MST UK & I Expert Dr Phil Reynolds. They officially opened in September 2021 with a celebration event that was attended by many stakeholders. Unlike the rest of the teams supported by MST UK & I the Team in Montpellier is based at the CHU rather than the local authority, justice service or not for profit organisation and also get their referrals from the CHU Psychologist.